The processing of carbon black (short name: CBp). Represents a key field of action for SIRIUS Eco Tec. The raw material carbon black (CBp) is a main component of tires and therefore sufficiently present in scrap tires, which can be recovered by our special processing technology.

The extraction of raw material carbon black (CBp) is carried out by depolymerization in our SIRIUS T10-Batch thermolysis plant from scrap tires. Carbon black (CBp) can now be enhanced by additional special process for the highest quality and is thus available as raw material for the processing industry.
The application is very diverse and Carbon black (CBp) found in many industries use, such as in the production of tires, refractory products etc.

The coating lines of SIRIUS Eco Tec it is possible to CBp commodity precisely adapt to the specific requirements of the customer and to deliver the recovered CBp commodity in the quality desired in each case by the customer. 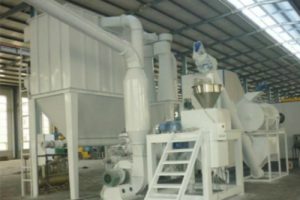 Carbon black is a black, powdery solid, which is depending on the quality and use to 80-99.5 percent of carbon. Targeted produced carbon black (an industrial raw material) is referred to as carbon black. Carbon black is a form of carbon with a high surface-to-volume ratio and is mainly used as filler and as a black pigment.

Carbon black is an important technical product, which is produced by incomplete combustion or pyrolysis of hydrocarbons in large quantities. In 2006, 8.1 million tons were worldwide, in 2011, 10.8 million tons were produced.

Carbon black is used on over 90 percent as filler in the rubber industry, mainly (about 70%) for car tires and approximately 20% for technical rubber products such as conveyor belts, V-belts, hoses, damping elements. The automotive industry is by far the largest consumer of carbon black. For tires more than 7.8 million tonnes were consumed in the year 2011th
Further, carbon black is used as a conductive carbon black in the manufacture of electrodes. Likewise, it is used in the production of refractory material as filler.

The produced during thermolysis process carbon black (short name: CBp) has a purity of about 85%. Without further treatment, such as removal of impurities or increase the specific surface area, the output material can indeed be sold on the market, yet is only a moderate retail price of currently EUR 100 – 230,- per tonne achieved.

If it is possible, however, to eliminate the contamination (purity <95%), prices of up to EUR 1.000,- per ton can be achieved. Another step that can increase the added value, in addition, is an increase in the specific surface area, which activated carbon is formed.